Review: Power of the Primes Predaking 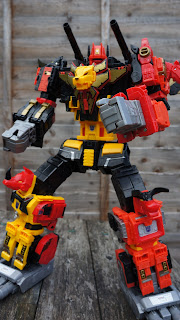 Ok, so this is going to be a complete contrast to my previous TFNation purchase review. I will declare upfront that I love Predaking and the Predacons. You can blame Simon Furman, his Divebomb-Swoop rivalry story, and a mother who wanted to keep me quiet while she was shopping so bought me a comic.

Predaking is this year's 'giant' Transformer from Hasbro, and is of a comparable height to Fort Max, Metroplex, Devastator etc from the last few years. Predaking, however, is ten times better than any of them.

I'll get the negatives out of the way first: he's lacking on the detail front, especially when compared to the Titans Return figures (other than the tiny 'Pretenders', I don't have any Power of the Primes stuff to compare to); the figures are very blocky and simple to transform; the matrix gimmick thing in his lion head is a bit unnecessary; the classic swords are not included; and, finally, the stickers don't fit on the figure very well.

That last one is the biggest issue for me. In these modern times, there's no excuse, at all,  for stickers not being the perfect size. These are overly large and thus, already, the corners are starting to curl. I expect many to look tatty, or have fallen off completely, in the near future. The other sticker issue is that that cover up sculpted detail. This again will not help them remain attached to the figure as many are not bumpy surfaces.

But enough of the doom and gloom - let the gushing commence!

As individual toys, the five Predacons are blocky, as noted, and most have a giant black lump on their person (which serves as the connection point when the five combine); however, they are all still highly poseable and look fantastic as a group. Standing the Predacons next to other figures, they look like an imposing gang, ready to beat the crap out of any puny Autobots who get in their way.

The Giant Black Lumps are paid off when the five combine incredibly securely together to form Predaking. I was blown away as to how poseable this giant, heavy toy is. His big feet and ratchet joints stabilise him, and I have no fear of this guy toppling over.

Transforming him is simple, but enjoyable. I've lost count of the times I've converted Predaking between the three modes (robot/animal/combiner) and can never decide which is my favourite to leave him (them?) in.

Predaking comes with a hefty £150 price tag. However, when you thing that this is 5 Voyager-sized figures, it's really not so bad. Most importantly, it's bloody good fun to transform, pose, and (dare I say it?) play with. Buy it.
No comments:

Email ThisBlogThis!Share to TwitterShare to FacebookShare to Pinterest
Labels: power of the primes, TFNation, TFNation2018, transformers 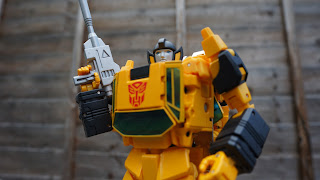 I passed on Sunstreaker when he first came out. There were two reasons for this: the first, that, despite being a fairly major G1 character, I've never had any particular love for him; secondly, that this is the figure in which Takara - for no other reason than 'because they can' - hit the Masterpiece toyline with a massive price hike (a price hike which hits ridiculous levels with the current Dinobot release - but that's a rant for another time).

I went to TFNation last weekend hoping for some kind of discount on Sunstreaker so I could finally add him to my collection. There was a discount, however there was still a very clear difference in price between him and all the other, similar sized, cars in the line.

Anyway, I forked over the money and now I have him. Was he worth it?

Skipping to the end: not really. As I've said, I'm not really enamored with the character; I'm sure Sunstreaker fans are likely to be far more positive. He looks good - don't get me wrong - as both a car and a robot, and is highly poseable. The transformation process, as you'd expect from a Masterpiece, is highly involved and quite clever, but I didn't find sitting there and fiddling with him particularly fun...and fun is the main reason I buy Transformers.

At no point have I thought, 'This is well worth the 80 quid I paid out for him.'

Yes, it's nice to fill a gap in the G1 team, but should the house begin to burn, he'll be the last thing I run to save. Sorry, Sunstreaker, I'm just don't like you very much.
No comments:

Reveal time! It's convention day and the work of the past...crikey, I think I started thinking about the AT-AT before Christmas and Han...I have no idea. I think everyone has wanted a giant slab of carbonite in their home since they first saw Empire, right?

The final job, before assembly, was to get everything down to the school. Thankfully, this is just 5 minutes down the road as it turned out not everything would fit in the car; specifically the giant base board of the AT-AT and, well, the entire slab of carbonite.

Yeah, Han had to be carried down the road, much to the delight of passersby.

There have been a couple of minor tweaks since the last blog entries. When I built the AT-AT in the hall, I completely forgot to put the ankles on. Since taking the whole thing apart just to add these pieces would have been a bloody nightmare, I ended up cutting a slot in the cardboard and then sliding them on. Worked fine and you couldn't see the cut.

Sadly, I never managed to get hold of a 6" Luke to dangle beneath it.

The final addition to Han was a couple of hooks on the back so I could run string through and tie him to something just in case. The weight is all on the front and it wouldn't take too much for the whole thing to topple and crush a small child. I didn't end up doing the panels on the side as doing eight of them would have driven me nuts. It'll be something to add at a later date, should I get the desire. 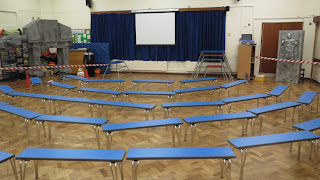 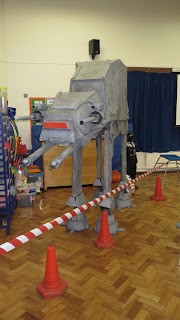 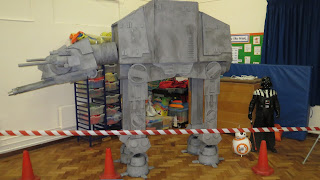 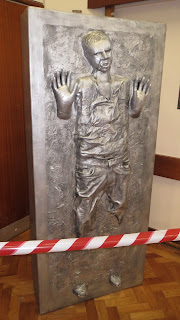 More photos from the convention are on the school website, here.

Of course the big question, with the con over, is where to store the bloody things. Um, yeah, good question. It'll sit in the garage along with all the other crap I've built and can't bring myself to throw out. At this point I'm 90% sure I'm not organising another con at school (long story) so there's a good chance this will be their one and only outing. Oh well, it's been a fun ride.
No comments:

Some weathering today, i.e. covering the whole thing in a black wash. Not a great success, I'll admit and it's ended up hiding come of the detail, but the 'clean' look was simply no good for a Star Wars vehicle. Given more time, I'd like to go back and add some brighter grey back in to balance all the wash, but for now, it'll do. 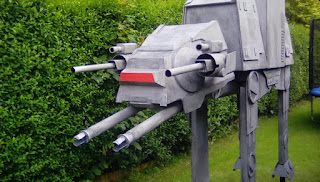 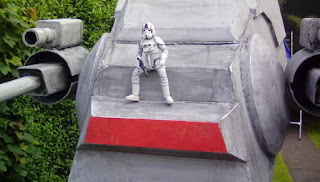 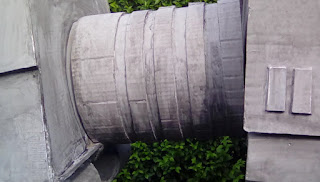 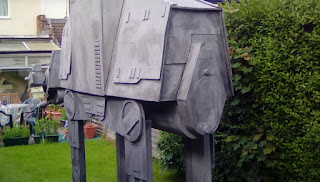 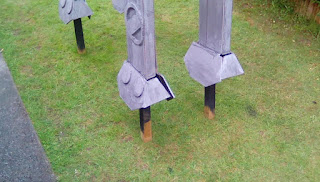 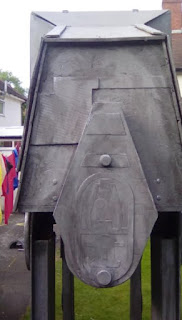 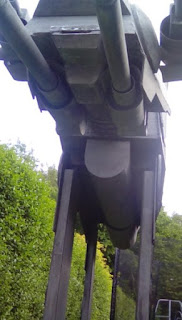 Next time this is assembled, it'll be at the school comic convention!
No comments:

So a tiny problem cropped up while painting the AT-AT; well, not exactly during the painting, more the taking the AT-AT apart afterwards: I destroyed the feet. As much as I loved them being able to stack on top of each other, they simply weren't strong enough. Drastic action was needed. Expanding foam came to help... 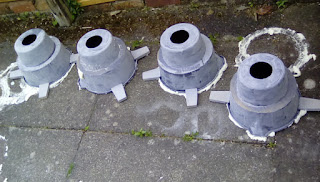 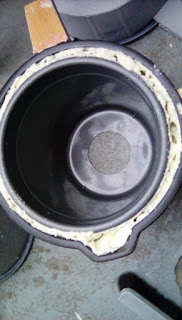 The trouble with expanding foam is that it doesn't start expanding very rapidly at first. There's a good few minutes before the expanding really kicked in and during those few minutes, well, I thought it wasn't expanding anywhere near as much as I wanted. So I added more and more... 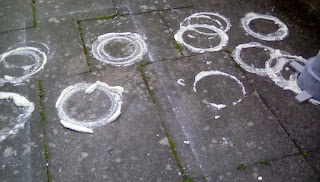 Turns out expanding foam is an utter bugger to get off paving. But at least the feet are nicely solid now.

Not a lot to say about this, other than I bought a tin of 'urbanite' emulsion from Homebase, picked up a brush and began to paint... 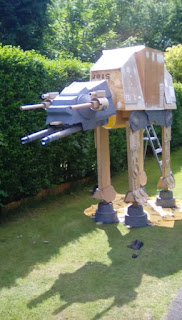 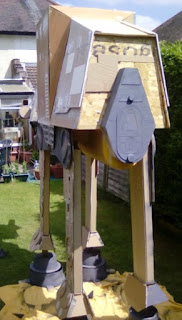 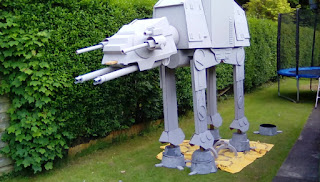 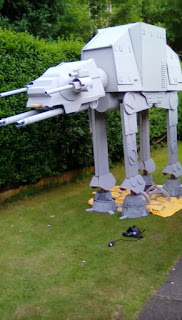 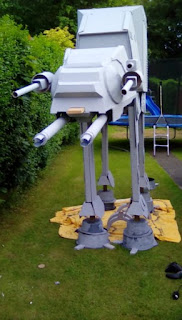 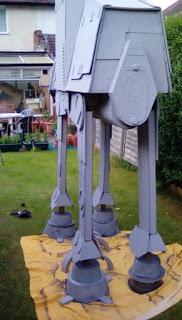